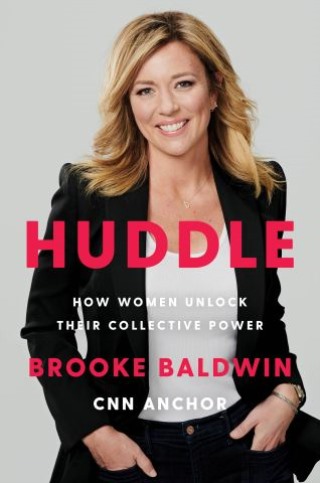 How Women Unlock Their Collective Power

CNN news anchor Brooke Baldwin explores the phenomenon of “huddling,” when women lean on one another—in politics, Hollywood, activism, the arts, sports, and everyday friendships—to provide each other support, empowerment, inspiration, and the strength to solve problems or enact meaningful change. Whether they are facing adversity (like workplace inequity or a global pandemic) or organizing to make the world a better place, women are a highly potent resource for one another.

Through a mix of journalism and personal narrative, Baldwin takes readers beyond the big headline-making huddles from recent years (such as the Women’s March, #MeToo, Times Up, and the record number of women running for public office) and embeds herself in groups of women of all ages, races, religions and socio-economic backgrounds who are banding together in America. HUDDLE explores several stories including:

Throughout her examination of this fascinating huddle phenomenon, Baldwin learns about the periods of huddle ‘droughts” in America, as well as the ways that Black women have been huddling for centuries. She also uncovers how huddling can be the “secret sauce” that makes many things possible for women: success in the workplace, effective grassroots change, confidence in girlhood, and a better physical and mental health profile in adulthood. Along the way, Baldwin takes readers through her own personal journey of growing up in the South and climbing the ladder of a male-dominated industry. Like so many women in her field, she encountered many sharp elbows on her career path, but became an early believer in adding more seats to the table and huddling with other women for strength and solidarity. In the process of writing HUDDLE, Baldwin learns that this seemingly new phenomenon is actually something women have been doing for generations—a quiet, collective power she learns to unlock in her transformation from journalist to champion for women.

BROOKE BALDWIN is a veteran journalist and Peabody Award finalist who has anchored the 2–4 p.m. (ET) edition of CNN Newsroom for more than a decade. She has often been sent into the field to cover the biggest breaking stories in the US and around the world. She played a major role in anchoring coverage of the Obama and Trump administrations and has also reported on stories from Europe, Africa, Asia, and the Middle East. She joined CNN in 2008, and viewers have come to know Baldwin for her versatility, authenticity, and humanity at the news desk. As the creator and host of CNN’s digital series American Woman, she has dedicated the latest chapter of her career to shining a light on trailblazing women in politics and culture. Baldwin graduated from the University of North Carolina at Chapel Hill in 2001 with a BA in journalism and Spanish. She lives in Manhattan with her husband, James, and their pug, Pugsley. Huddle is her first book.