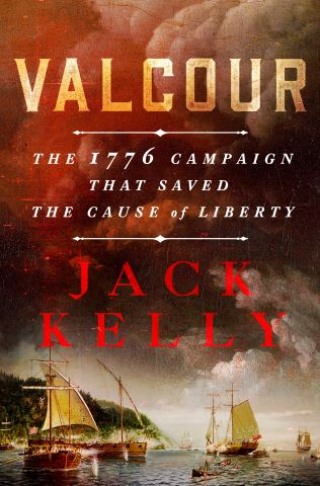 The 1776 Campaign That Saved the Cause of Liberty

The wild and suspenseful story of one of the most crucial and least known campaigns of the Revolutionary War when America’s scrappy navy took on the full might of Britain’s sea power.

"Vividly written... In novelistic prose, Kelly conveys the starkness of close-quarter naval warfare, where retreat was impossible... Ironically without the tarnished hero of Valcour, the US might not exist today." —The Wall Street Journal

"Few know of the valor and courage of Benedict Arnold... With such a dramatic main character, the story of the Battle of Valcour is finally seen as one of the most exciting and important of the American Revolution." —Tom Clavin author of Dodge City and co-author of Valley Forge

During the summer of 1776, a British incursion from Canada loomed. In response, citizen soldiers of the newly independent nation mounted a heroic defense. Patriots constructed a small fleet of gunboats on Lake Champlain in northern New York and confronted the Royal Navy in a desperate three-day battle near Valcour Island. Their effort surprised the arrogant British and forced the enemy to call off their invasion.

Jack Kelly's Valcour is a story of people. The northern campaign of 1776 was led by the underrated general Philip Schuyler (Hamilton's father-in-law), the ambitious former British officer Horatio Gates, and the notorious Benedict Arnold. An experienced sea captain, Arnold devised a brilliant strategy that confounded his slow-witted opponents.

America’s independence hung in the balance during 1776. Patriots endured one defeat after another. But two events turned the tide: Washington’s bold attack on Trenton and the equally audacious fight at Valcour Island. Together, they stunned the enemy and helped preserve the cause of liberty.

Jack Kelly: JACK KELLY is a journalist, novelist, and historian, whose books include Band of Giants, which received the DAR's History Award Medal. He has contributed to national periodicals including The Wall Street Journal and is a New York Foundation for the Arts fellow. He has appeared on The History Channel and interviewed on National Public Radio. He grew up in a town in the canal corridor adjacent to Palmyra, Joseph Smith's home. He lives in New York's Hudson Valley.