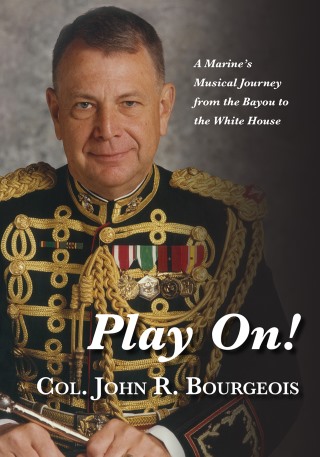 A Marine's Musical Journey from the Bayou to the White House

With his hallmark wit and eloquence, Colonel John R. Bourgeois gives an autobiographical account of his life and career as a musician from humble roots who rose through the ranks to became the twenty-fifth director of “The President's Own” United States Marine Band. Page after page is filled with recollections from Colonel Bourgeois's tenure with the Marine Band, many of which involve the most significant musical and political figures of the twentieth and twenty-first centuries, including multiple presidents, first ladies, and a number of renowned conductors and artists. Augmenting the stories are newspaper clippings, letters from U.S. presidents, transcriptions of speeches Colonel Bourgeois gave at various events, musical programs for select concerts from throughout his illustrious career, and 90 previously unpublished photographs of John Bourgeois with his family, friends, and the presidents and first ladies he served. Perfect for wind band aficionados and history buffs alike, readers are sure to delight in the tales and musings of this towering figure of American political and musical life.

John R. Bourgeois: Colonel John R. Bourgeois, USMC (ret.), joined the Marine Corps in 1956 and entered “The President's Own” in 1958 as a French hornist and arranger. Named director in 1979, Colonel Bourgeois was promoted to his present rank in 1983. He retired from active duty on 11 July 1996. His acclaimed career spanned nine presidential administrations, from Presidents Eisenhower to Clinton. As director of “The President's Own,” Bourgeois was music adviser to the White House, and he is the only Marine musician to have served in every rank from private to colonel.