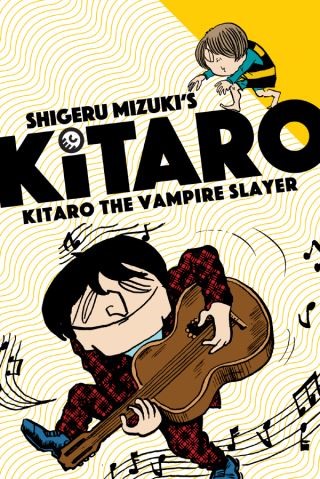 Brit-pop meets Japanese folklore, Shigeru Mizuki summons equal parts humour, spookiness and sheer absurdity Kitaro the Vampire Slayer is the fifth volume in Shigeru Mizuki’s bizarre stories about a yokai boy and his entourage of otherworldly friends. One of the most popular Kitaro tales, the title story pits Kitaro and his family against a Beatles-inspired mop-topped, guitar-playing vampire named Erit and his castle of horrors. In an unexpected twist—spoiler alert!—Kitaro meets his demise, but even death is hardly enough to keep our favorite yokai boy down. Along with the villainous vampire, Kitaro faces a trio of monsters straight from Japanese folklore. Mizuki often pulled from classic Japanese folk tales for inspiration, as shown in these three stories. A certain serpent and temple bell appear in “The Phantom Steam Engine,” then it’s onto a bird-like creature with a big beak in “Ubume,” and Kitaro had better not look behind him when the Ushiro Gami comes to town. The four stories in this volume are collected from the late ’60s golden age of Gegege no Kitaro. Appearing in English for the first time, this kid-friendly edition is translated by Mizuki-scholar Zack Davisson and includes bonus features like “Yokai Files,” where we are introduced to Japan’s folklore monsters, and the fifth installment of the “History of Kitaro” essay by Davisson. For fans of quirky horror, Kitaro the Vampire Slayer is not one to miss! Translated from the Japanese by Zack Davisson.