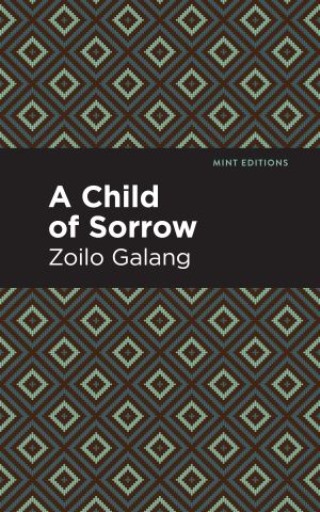 A Child of Sorrow

A Child of Sorrow (1921) is a novel by Zoilo Galang. The novel, Galang’s debut, has been recognized as the first work of published Filipino fiction written in English. Modeled after popular nineteenth century romances written in Spanish and Tagalog, A Child of Sorrow is a classic coming of age tale engaged with themes of friendship, desire, and the loss of innocence. Simple and heartfelt, A Child of Sorrow remains a groundbreaking work of literature from an author who dedicated his career to education and the arts.

“In one of the rural and sequestered plains of Central Luzon, called the Fertile Valley, where the rice fields yielded the cup of joy to the industrious farmers, and where the harvest filled aplenty the barns of the poor, there lived simple, homely people, free from the rush and stir of city life.” In this idyllic setting, Lucio and Camilo discuss their plans for summer vacation. While Lucio, a dreamer “who painted brilliant lives on the nice canvas of memory,” wants to immerse himself in his collection of books, Camilo wants his friend to join him in the world beyond words. Together, they take a trip into town, hoping for adventure and camaraderie—and, if possible, to meet a young woman to fall in love with. Despite Camilo’s encouragement, however, Lucio longs to write poetry, to commune with the natural world with nothing but his own thoughts to keep him company. One bright morning, he runs into Rosa returning home with a pitcher of water. Before he can collect himself, Lucio confesses his undying love.

With a beautifully designed cover and professionally typeset manuscript, this edition of Zoilo Galang’s A Child of Sorrow is a classic work of Filipino literature reimagined for modern readers.

Zoilo Galang (1895-1959) was a Filipino novelist and folklorist. Born in Bacolor, Pampanga, Galang was raised toward the end of Spanish rule and the beginning of the American colonial era. Educated at Pampanga High School, he became a stenographer and pursued a law degree, likely without finishing. In 1921, he published three groundbreaking works of Filipino literature written in English, each the first of their kind in history: A Child of Sorrow, a novel; Tales of the Philippines, a collection of legends and folktales; and Life and Success, a collection of essays. Throughout his career, Zoilo wrote history books for elementary school students, supervised the publication of a twenty-volume encyclopedia on the Philippines, and published the first Filipino short story collection written in English.